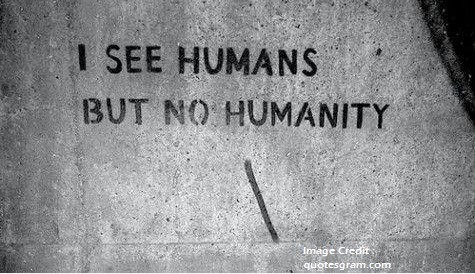 I read about the news last night. Blame it on the “mobile generation”. I read it around 12:30 am when not much details were known. But the mere fact that one person like you and me was killed, sorry Lynched (its not just a word!) right outside his house instigated rage and unrest. I was scared. For everyone I loved.

As the details flowed in, the guy was taken by a mob for having a brief altercation for ensuring safety of his son. It sounds like a very basic instinct for you and me. If anyone tries to harm our family (intentionally or unintentionally) we shout back . But what followed next was no where close to humane.

When I read a news like this, I feel the monster is there in open. Earlier it seemed farther, away. But slowly is drawing close. The place where this happened was not a village or a small town. Its a place where educated people like you and me live.

I was scanning my Facebook wall today and could read the social out pour. People blamed it on minority. Someone appealed to not employ immigrants. People accused the Delhi government of not picking this up vehemently with judiciary. Honestly, I don’t care about politics, minority, religion or caste. I care for a human life. Which is lost here.

Apparently, plot of bollywood films like Agneepath still hold true. So the “kancha cheena” is not just a fictitious character. He is out there in many of us. I remember leaving the hall when Hritik’s father in the movie was lynched by villagers. I cried citing this is not real. So, they cant subject us to crass violence. But last night, one son saw his father being killed by bunch of people. In 2016.  A well educated middle class father. His family will always grieve for the fact that he never caused any harm to anyone. He did not commit any crime. He did not deserve this.

We were all humans till race disconnected us, Religion separated us, Politics divided us and wealth classified us.

What do you think his son would be feeling right now? He must be craving to know WHY his father? What wrong did he do?

I do not want to localize it as Delhi NCR effect. Today terrorism is on a global scale. Countries like Paris and Belgium are seething. No place is safe. the problem is the human race.

With a very heavy heart I am writing out the three facts I have learnt :

1. Never fight for your right. Say sorry, even if its not your mistake. And move on.

It doesn’t matter to those evil souls if they are free or captivated. They do not have money or career. At least they’ll get food to eat inside. But whose loss it was? His family. They’ve lost a companion and bread winner.

2. Its a goon’s land after 10 pm. Good people don’t go out. They stay indoors with doors locked.

I guess their fault was to play around midnight, even though in their own house’s veranda. That’s not the time for sane people to be doing anything. Its the goon’s law post 10 pm. Even in the capital of this country.

3. A human life is insignificant.

A human being evolved from animal. But eventually the distinction is fading away. Have you ever seen an animal attacking his enemy and then letting him go? They’ll slaughter their target and even feast on them. Similarly for human like animals,
your life holds no meaning. So hold back as long as you can.

I pray, from deep inside my heart for peace of the departed soul. You will be safe up there. For my readers, please keep his family in your prayers. The loss is irreversible. We can only feel a quarter of the grief and pain his family is going through now.

I pray for peace and humanity. Amen!